Despite the news of better than expected GDP growth for the United States, the US dollar fell amid pre-holiday profit taking. This affects working hours and market liquidity, and EUR / USD had the best chance of rebounding to a higher level. It has touched resistance 1.1340, where it has settled as of this writing and ahead of the second US economic data bundle announcement.

The euro’s gains could come up against disappointment over European restrictions aimed at containing the rapid spread of the Corona variant.

Yesterday, the US Department of Commerce said the US economy grew 2.3% in the third quarter, slightly better than previously thought. But prospects for a strong recovery in the future are clouded by the rapid spread of the latest type of coronavirus. The third and final look at the performance of the GDP, the country’s total output of goods and services, was above last month’s estimate of 2.1 percent growth.

The regained strength is mainly due to higher consumer spending than previously thought, as well as companies restocking more than initial estimates revealed. The 2.3% gain in the third quarter follows explosive growth that began the year as the country emerged from the pandemic, at least economically. Growth jumped to 6.3% in the first quarter and 6.7% in the second. The emergence of a summer variant of the delta was responsible for much of the slowdown in the third quarter.

Now, with the emergence of the omicron variable, which adds to high inflation and lingering supply chain problems, there are fears that growth may be limited as we approach 2022. These concerns have sent the The stock market has been in a turbulent run in recent days, despite new optimism that omicron’s risks could be brought under control, and the Dow Jones Industrial Average rose 560 points on Tuesday and another 261 points on Wednesday.

For his part, US President Joe Biden on Wednesday held a meeting of the Supply Chain Disruption Task Force in Washington, where he promoted what he called significant progress in reducing bottlenecks. bottlenecks in ports and other problems that have caused shortages of goods and contributed to increased prices for consumers. Biden said retail inventories were up 3% from a year ago and the availability of products on the shelves was 90%, which is close to what it was before the pandemic.

The head of the World Health Organization has warned that comprehensive recall programs in wealthy countries risked prolonging the COVID-19 pandemic and said “no country can come out of the epidemic.” While vaccines have saved many lives this year, their unequal sharing “has cost many lives,” WHO Director-General Tedros Adhanom Ghebreyesus said.

Tedros previously called for a moratorium on the use of boosters for healthy adults until the end of this year to counter the uneven distribution of vaccines around the world. Currently, about 20% of the vaccine doses given daily are boosters, Ban said. He added that “comprehensive booster programs are more likely to prolong the epidemic than to end it, by diverting supplies to countries that already have high levels of immunization coverage, giving the virus a greater opportunity to spread. to spread and to transform “.

Despite its recent gains, the EUR / USD currency pair is still in a downtrend. For this to change, bulls need to break through resistance levels 1.1485 and 1.1620. This is according to the performance on the daily chart below. On the downside, a move below the support at 1.1300 will still support the bearish trend. I always prefer to sell the EURUSD currency pair from each bullish level.

All the focus will be on U.S. economic data, which includes the announcement of durable goods order numbers and reading the personal consumption expenditure price index, which is how the Federal Reserve measures the economy. inflation in the country, in addition to announcing the reading of the number of weekly jobless claims and home sales. 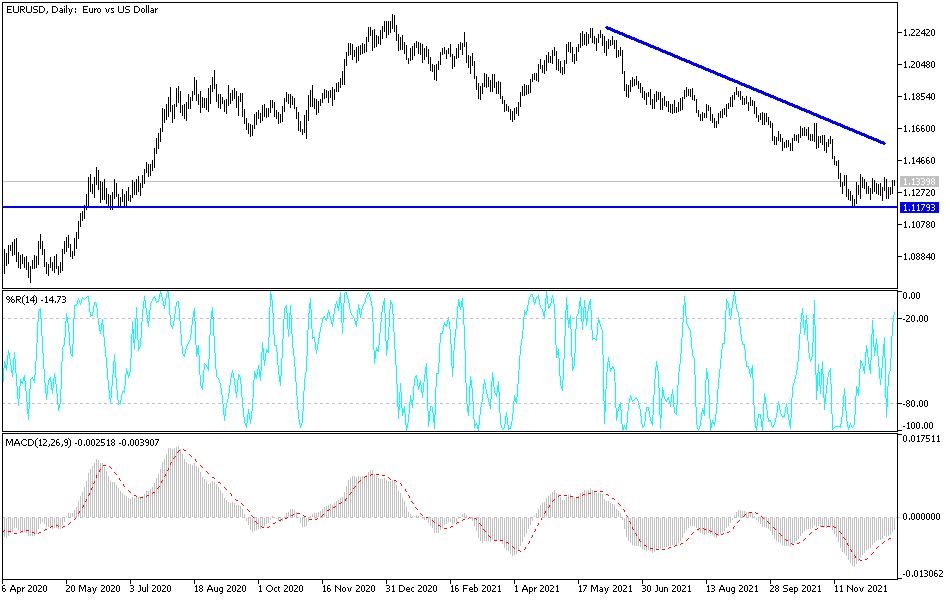